Impington Village College officially opened in September 1939, which meant that 2014 marked the 75th Anniversary.  The opening of the college coincided almost exactly with the declaration of the second world war.  The building design was so iconic at the time that the British Council commissioned a series of photographs of the building and the people who used it.  These images from 1939 will be exhibited at the College as part of the anniversary festival this year. 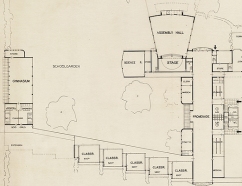 The main Grade 1 Listed building at Impington has the distinction of being designed by Walter Gropius, founder of the Bauhaus Movement.  Bauhaus was acclaimed as the fountainhead of the modern movement in architecture, bringing new consideration for the social impact of the built environment.  Impington Village College is the only public building in the UK designed by Gropius whose architecture aided the acceptance of Modernism in Britain.  Gropius’ radical design for the Village College laid out a model for school and community buildings that has since been replicated around the world.  The Building has been celebrated by many notable figures including the British history of architecture professor Sir Nikolaus Pevsner (author of the 46-volume series guides The Buildings of England) who describes it as “One of the best buildings of its date in England, if not the best”.

The decision to build a Village College in Impington was made possible by the support of a wealthy and powerful local family, The Chivers.  As a model employer they made a major contribution to the welfare of the villagers in Histon and Impington, many of whom worked in the Chivers factory.  In 1930 the Chivers family made a gift of land, property and money for the formation of the Village College.

The concept of the Village College, which was created by the visionary educationalist Henry Morris, was that the school should act as a centre for the community as well as a place where students learn.  These values are held as truly today as they were when the College was founded nearly a lifetime ago.  The College continues to serve the community with public access to the facilities, a state of the art Sports Centre, a full programme of community and adult learning opportunities, and over 50 clubs and societies for students as well as adults.  The College also has a highly successful International Sixth Form, which was the first school in Cambridgeshire to offer the International Baccalaureate as well as A Levels to students from across both the region and globe.